ATLANTA- The American Library Association (ALA) today announced the top books, video and audio books for children and young adults – including the Caldecott, Coretta Scott King, Newbery and Printz awards – at its Midwinter Meeting in Atlanta, Georgia.

John Newbery Medal for the most outstanding contribution to children’s literature: “The Girl Who Drank the Moon,” written by Kelly Barnhill, is the 2017 Newbery Medal winner. The book is published by Algonquin Young Readers, an imprint of Algonquin Books of Chapel Hill, a division of Workman Publishing.

“Freedom Over Me: Eleven Slaves, Their Lives and Dreams Brought to Life by Ashley Bryan,” written and illustrated by Ashley Bryan and published by Atheneum Books for Young Readers, an imprint of Simon & Schuster Children’s Publishing Division;

“The Inquisitor’s Tale: Or, The Three Magical Children and Their Holy Dog,” written by Adam Gidwitz, illustrated by Hatem Aly and published by Dutton Children’s Books, Penguin Young Readers Group, an imprint of Penguin Random House LLC; and

“Leave Me Alone!” illustrated and written by Vera Brosgol and published by Roaring Brook Press, a division of Holtzbrinck Publishing Holdings Limited Partnership;

“Du Iz Tak?” illustrated and written by Carson Ellis, and published by Candlewick Press; and

“They All Saw a Cat,” illustrated and written by Brendan Wenzel and published by Chronicle Books LLC. 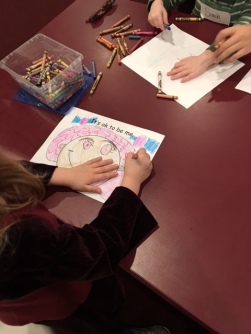 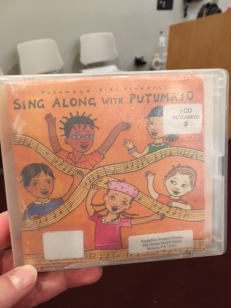 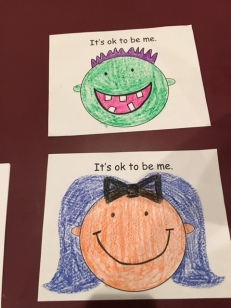 We are introducing a new storytime called, Mirrors & Windows. This storytime will be offered once per month with an all-inclusive theme. We will read stories about all kinds of people from all over the world. We will embrace stories about people of all sizes, shapes, colors, beliefs, jobs, and families. We will sing songs and participate in hands- on activities that encourage growth and development.

Go to tredyffrinlibraries.org for details on upcoming programs and storytimes.

This entry was posted in Story Times, Storytime.

Winner of our jar of shells. Nora’s guess of 156 was the closest guess without going over the total of 174.

Stop by the library this week to submit your guess for our BIG JAR OF BEADS!

This entry was posted in Summer and tagged Guessing Jar, Shells, Summer 2016.

UPCOMING KIDS EXPLORE TOPICS
Voted on by those who attended Kids Explore on June 28.
July 5 & August 9: Daytime Sleepovers
Wear your pajamas, bring a pillow/sleep buddy and a drink, watch DVDs, and eat popcorn. We provide the popcorn, you provide the beverages.
July 12 & July 26: Craftaculars
Use our vast collection of arts and crafts supplies to design and build your own creations.
July 19: Tabletop Gaming
Play our games or bring your own to play. No electronic games, please.
August 2: Book Bingo
A yearly favorite! Play bingo and win books to keep.
Kids Explore is for ages 6-10 and meets Tuesdays from 2:00-3:30. Registration is not required but space is limited, so plan to arrive between 1:30 and 1:45 to get your ticket and nametag.

This entry was posted in Michele, Summer. 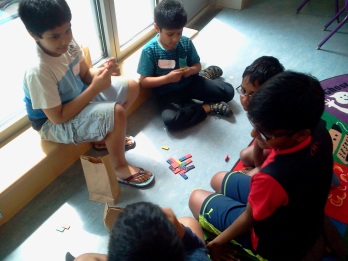 Tuesday was our first Kids Explore for the summer, the theme was dominoes and we had a full house! The kids participated in a domino scavenger hunt, selected their own set to take home and keep, and learned the basic game of draw dominoes. During the last few minutes, the kids voted on the kinds of programs they’d like to do for the remainder of the summer in Kids Explore. That list will be posted here and on our Facebook page (Tredyffrin Children) shortly.

Kids Explore is for ages 6-10 and meets each Tuesday from 2:00-3:30 through August 9. Registration is not required, but space is limited to 18 kids, so tickets will be given out starting at 1:30 each week.

This entry was posted in Uncategorized.

What a fun day we had kicking off our Summer Reading Program. We registered more that 130 friends and had a great time! This year we featured a Story Walk. We walked through the beautiful Strafford Park and read the story, From Head to Toe by Eric Carle. We did activities at each stop. At the end we enjoyed making fun corner bookmarks.

Didn’t make the party? Don’t worry you can still register for our Summer Reading Club at the Children’s Department. 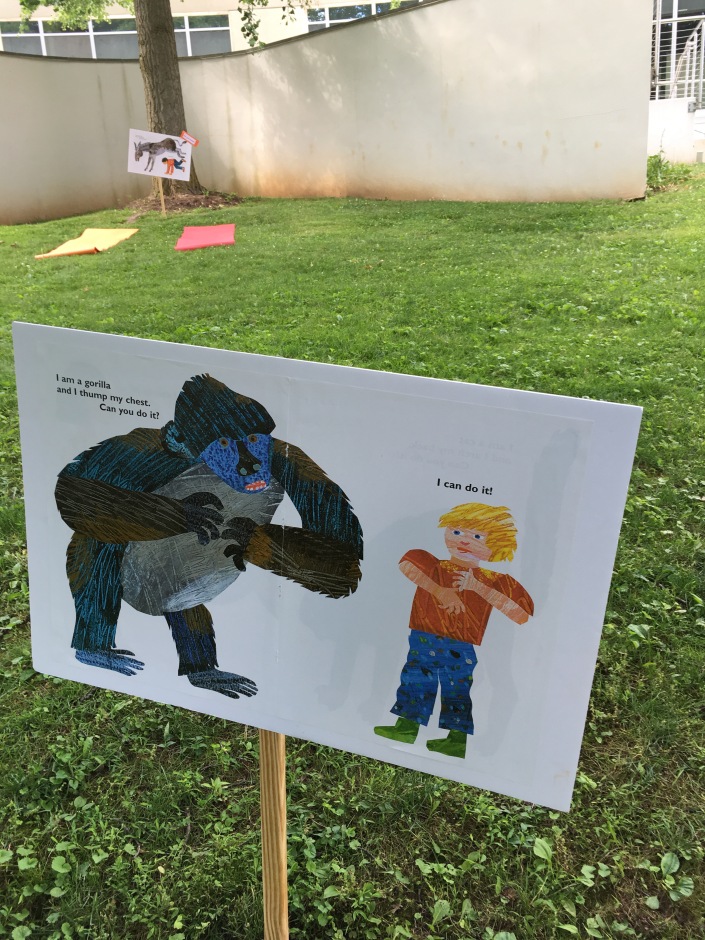 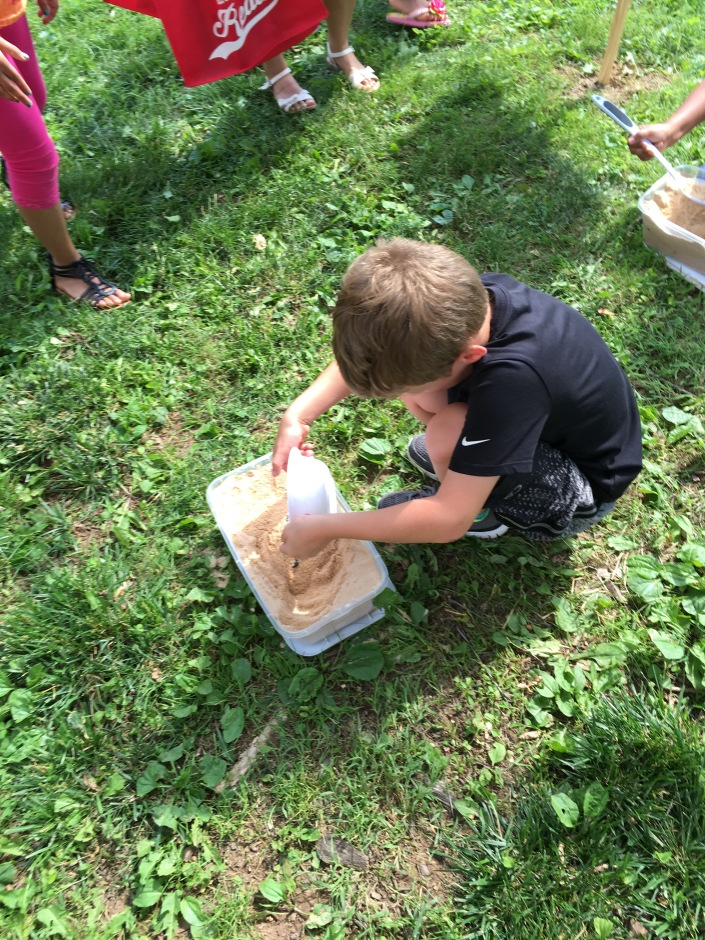 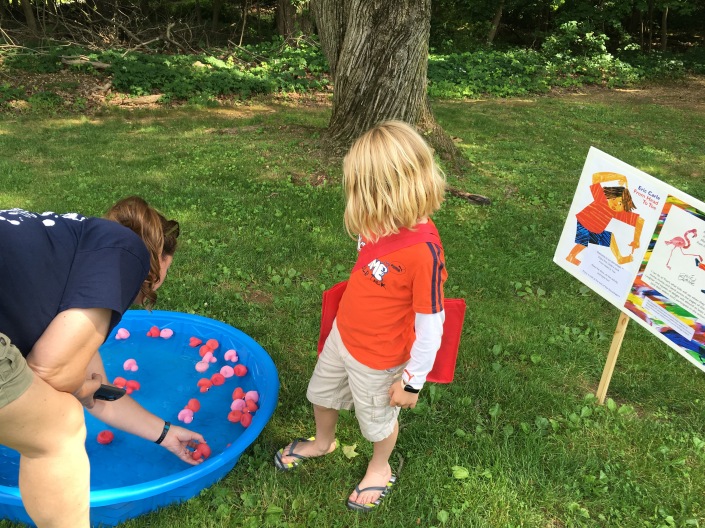 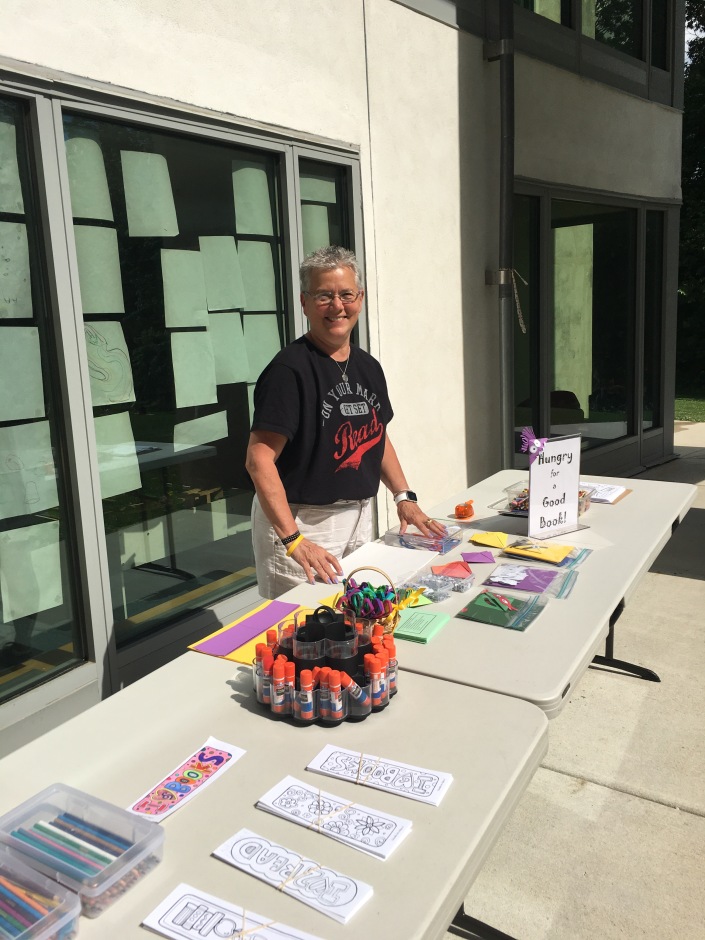 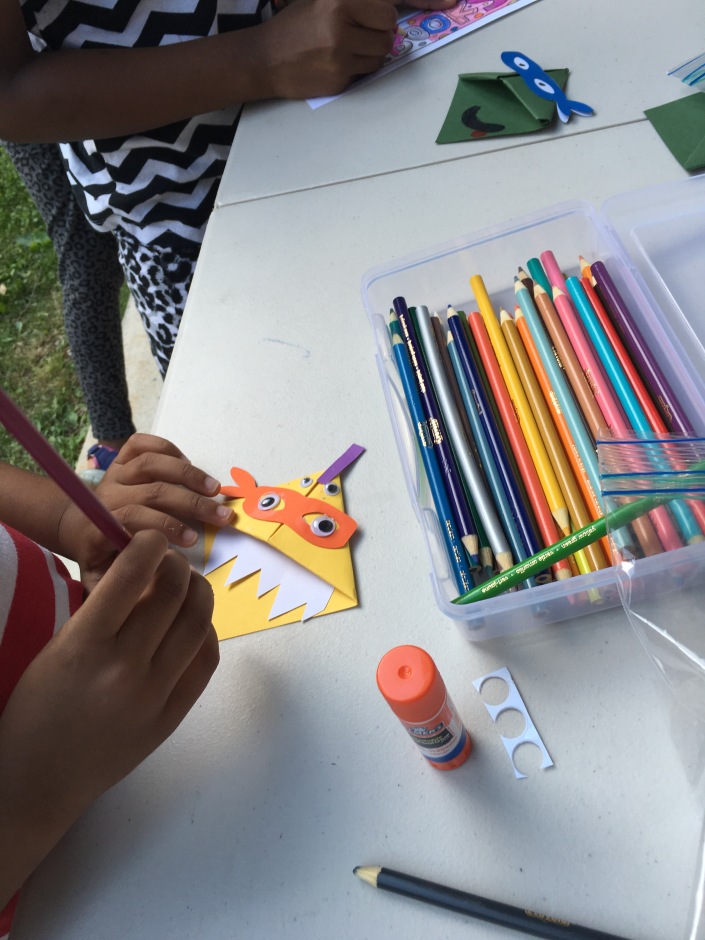 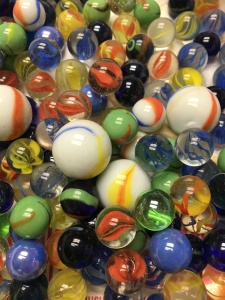 Each week during Summer Reading we will have a new Guessing Jar Item. The first week was a big jar of marbles. How many?? The grand total is 280.

Stop by the Children’s Depratment this week to guess how many Scrabble tiles are in our jar. We will announce winners on Mondays.

We enjoyed a reading of The Very Hungry Caterpillar, a fun matching game, an adorable headband craft, and helathy snacks. 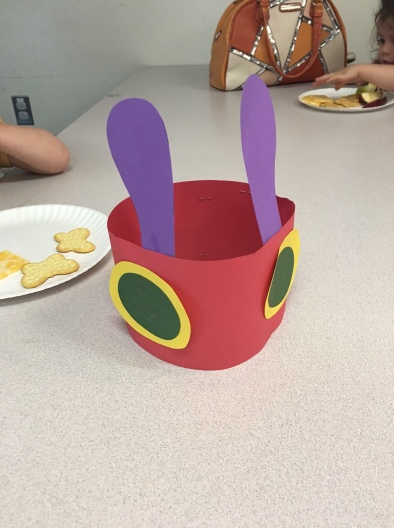 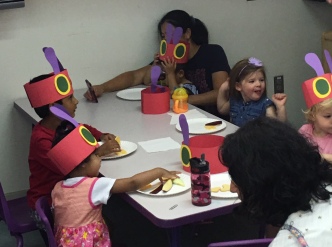 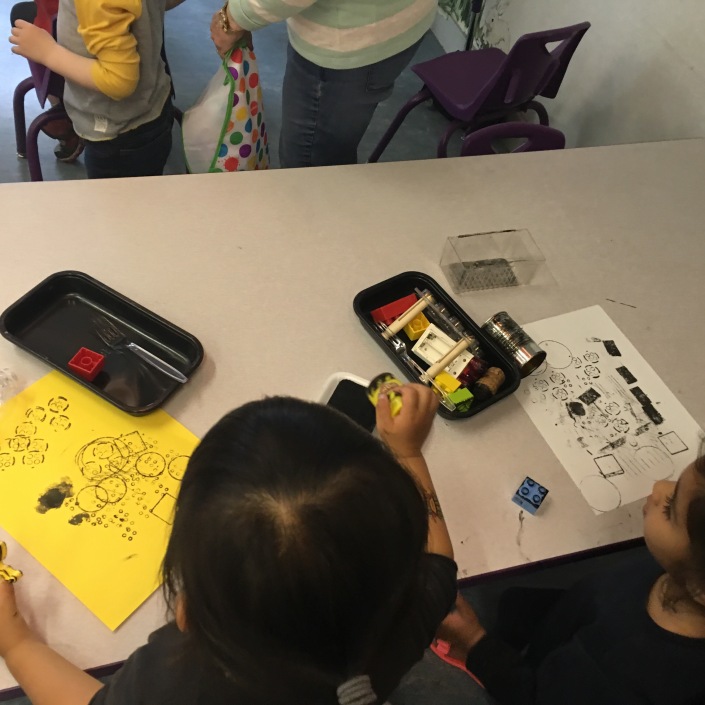 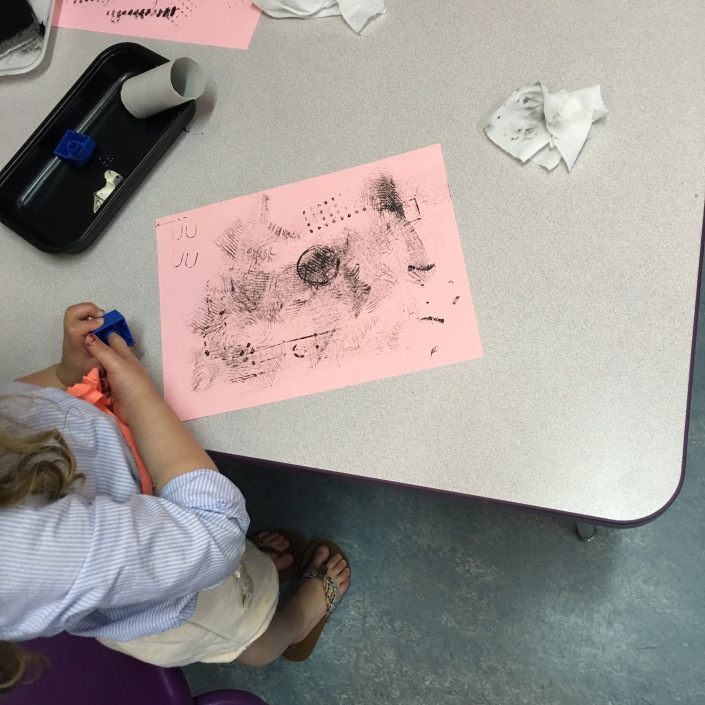 Our Maker Programs encourage children to learn while they play. We encourage children to discover new things on their own. We know that adults can use their fingers and have the coordination to stamp ink on paper but our little ones are discovering new things, developing fine motor skills, and so much more. Using everyday objects such as cars, action figures, tin cans, and plastic bottles children discovered the various prints they could create on paper using ink. We are very proud of all children who participated in this process program, Printmaking.

When we encourage children to participate in progress programs sometimes the adults have the most challenges letting go, letting the children explore and learn new things for themselves. It’s ok if your child’s work looks nothing like their neighbor’s work, in fact we think that’s a good thing! In a process based activity there is no final product. It is all about the process; messy fingers, outside the lines, original work, and lots of fun!

Thank you to Miss Linda for creating this amazing Maker Series for preschool children. 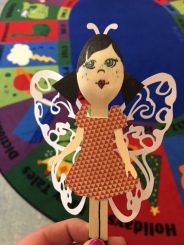 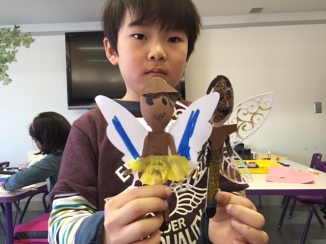 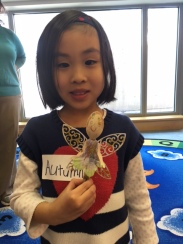 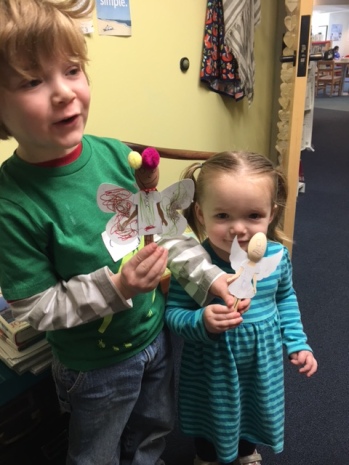 Daisy Meadow Fairy books for everyone!! 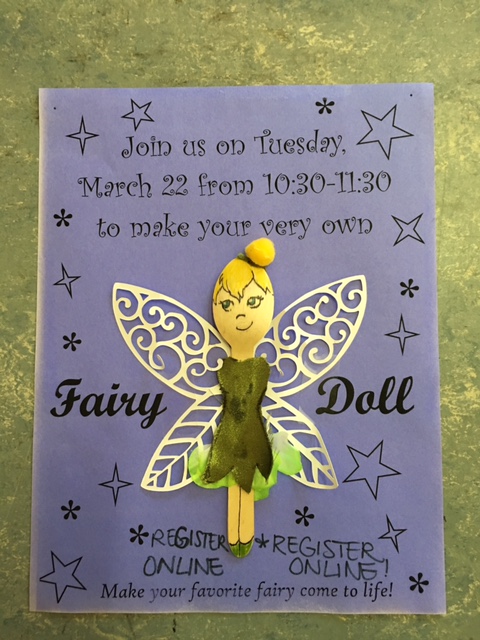 Fairy dolls for everyone!  We enjoyed a magical morning making fairy dolls using spoons. We added wings, faces, clothes, and of course lots of glitter. We had plenty of Daisy Meadows’ fairy books for checkout.